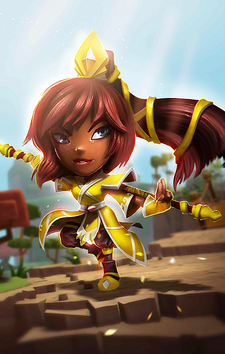 Aria is an acrobatic master Assassin that (almost) perfectly dodges every attack and strikes back instantly. She is the second most expensive hero in the game (in terms of resources). The one hero more expensive to ascend is Sun Wukong. Her tokens are primary available in the Aether Shop and both of her Ascensions require exclusively rare Celestial Evos (

Ember Sanguine is very similar to her in this regard).

Provoked). She has a 100% chance (guarantee) to dodge every attack when the attacker is

Paralysis) and the attacker has no

Master of Combat. Aria's attacks cannot be dodged, even if she is

In conclusion, it can be said that Aria is overpowered against opponents who she can debuff and who cannot hit her because of that. While on the other hand Dwarfs and other heroes like the Honorbound Samurais Hansuke and Takumi can hit and beat her.

Beside the counter heroes mentioned above there are more ways to counter her in defenses:

Ember Sanguine and all other heroes moved to the portal.

Because of the incredible amount of excess tokens that are needed to buy some of her tokens it requires a several weeks (Forum: Finishing Aria) to raise her star and ascension level.

If Aria is teamed up with

Marrow whose special attacks can inflict off-balance and paralysis, Aria can dodge perfectly ("tank") any enemy who has no

Perfect Swing. If she should "tank" just watch out for enemies that are immune to debuffs like Constructs.

Aria (with Astrid, Cobressa and Ember) provoked the boss.

In 2018 Aria was featured several times in the Portal

Aria is Epic!
Community content is available under CC-BY-SA unless otherwise noted.
Advertisement