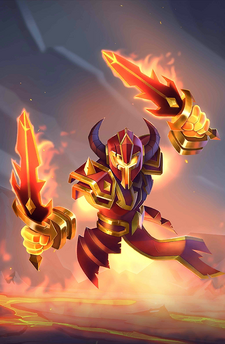 Archon was added into the game as part of the special event Archon’s Assault on 2019-03-20. At that time he was the 3rd Spirit hero available.

Zen. Archon simply can't understand why Zen is so relaxed all the time. Being relaxed is boring! Life is about burning brightly with passion and vigor! Why would you want to sit around on a little cloud not being expressive?!

Archon has some very unique abilities which start to come into play with his first ascension. To make full use of his potential one needs to have him fully ascended, which is quite a challenge given the fact the he needs 5 stars for that.

First of all, his trait

Second, with his final ascension, he gets the trait

War Incarnate which makes him a new kind of revenant. Basically this means, that when Archon dies he will be removed from the battleground, however kind of possessing the strongest ally and returning in his place, if the possessed hero dies. This effect can be triggered several times and can not be dodged with the typical corpse removal strategies or by purging, buff stealing and so on. This implies, that in a worst case (or best case, depending on your position) Archon has to be killed 4 times to be done with him for good.

Archon is Epic!
Add a photo to this gallery
Retrieved from "https://dungeonboss.fandom.com/wiki/Archon?oldid=27662"
Community content is available under CC-BY-SA unless otherwise noted.