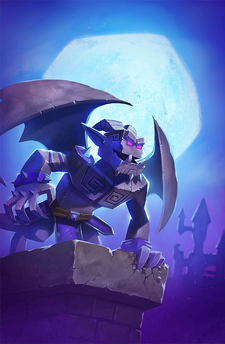 Agnon, the Construct Warrior created by Varruk Fiddlestrom, flew on 2018-02-17 into the game. He is the 78th Hero in Dungeon Boss. Players could unlock him by opening doors on the Hero Calendar.

Plummeting Doom . His damage mulitplier increases with the boosted DEF stat of the target allowing

Agnon to take out these targets with a single action. The

Runes and shields such as

Aegis Shield can prevent these "one-shots".

He is sometimes used in conjunction with

Drakk the Warlord and the other barbarians. With his Epic and

Enabler Runes he is often used with

Stoned targets and benefits from Agnon's

Serenity who can buff

Haste that works since the recent Hero update (see below) with Agnon in Graniteform.

Ella Ametryst can charm a fully enabled Agnon (with Enabler runes) and make him to attack his allies and turn them into statues.

Graniteform no longer removes buffs and works like the

Agnon can use Tank runes with

Haste while in Graniteform. An earlier minior update (March 2020) of Agnon also made the Graniteform buff no longer purgeable.

Therand Fiddlestrom was banished from the labs for experimenting with forbidden sciences. It was he who stumbled upon the formula to bring life to the gargoyle, which was once just a frightening decoration atop the Lich's castle.

Agnon is Epic!
Community content is available under CC-BY-SA unless otherwise noted.
Advertisement