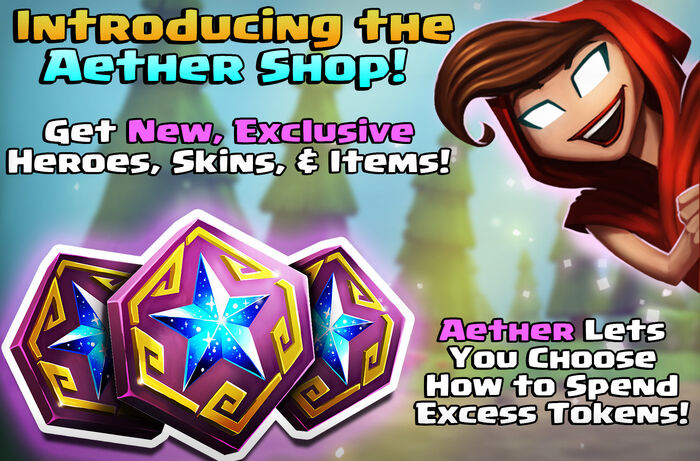 Aether – to get the exclusive hero

Ultimate Skins, and other cool items that won’t be available anywhere else!

Any player that has at least one six-star Hero (★★★★★★) AND at least one excess Hero Token can access the Aether Shop.

How to quickly get 6-star Heroes

Aether. Each time this happens, you will see excess Tokens earned count down and how much Aether is gained.

What is each excess Hero Token worth in Aether?

All Heroes have been classified as either a Bronze Hero, Silver Hero, Gold Hero or Legendary Hero.

Excess Hero Tokens are worth:

Like the other Shops in Dungeon boss the Aether Shop offers all the goodies sorted into different categories. There is one tab for each category: Featured, Boosts, and Items. All available items cost

Aether tokens. Let's have a look at the different tabs:

Since August 2020 there are bulk offers with a discount for Stamina and Raid Tickets.

The offers have no daily limit.

Each boost will be active for 2 hours.

Note: All Ulimate Skins costs 65,000 Aether and add an extra trait to the hero. Check out Ultimate Skin Effects for details.

Community content is available under CC-BY-SA unless otherwise noted.