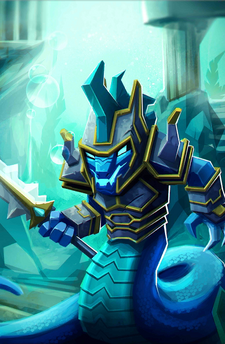 Admiral Kreel has yet to discover their Epic.

Admiral Kreel was the greatest Warrior the Reptile armies have ever known. Able to take down entire armies on his own, using natural water affinity and tides to his advantage, disrupting enemy formations and wreaking havoc through their ranks, he quickly rose to prominence, taking control of the Gorgon’s Navy, and always fighting in their name. He and

General Krexx came to vie for their notice regularly, competing to see who took down the bigger conquest, until fortune favored Krexx. He and Kreel encountered a legendary behemoth, who froze most of their naval army. Both reptiles launched themselves at the titan in a fury, and Kreel scored the first hit, held the monsters focus, and was beginning to gain the upper hand. General Krexx, in a stunning move of treachery, left Admiral Kreel to search for an even greater fight instead, and Kreel was sucker punched with the sudden betrayal, frozen solid, encapsulated in a block of magical ice and left adrift at sea. Enough time has passed, for the magic of the ice to fade away, and Kreel has returned to world, eyesight hindered from the long sleep, to find the Gorgons and seek vengeance on the one who betrayed him.